Though state senators approved the measure earlier Wednesday, their counterparts in the House failed to call it for a vote before the lame duck session ended.

State Rep. La Shawn Ford, a Chicago Democrat who was part of a legislative working group that contemplated the additional licenses, said the bill fell flat because legislators “failed at the art of compromise.”

“Because of that the state of Illinois continues to lock Black people out of an emerging economy,” said Ford, who previously said the state’s social equity efforts have amounted to “an epic failure.”

Ford said the major sticking point was the prospect of allowing existing medical dispensaries to relocate without losing their ability to sell recreational weed — something some major pot firms have long been pushing for. Industry insiders have estimated the state is missing out on roughly $100 million in tax revenues by blocking dispensaries from moving.

While that provision was included in a recent amendment to a separate bill, it was absent from the measure approved by the Senate. Ford, who doesn’t support the relocation effort, claimed the debate over whether to include that language in the final bill ultimately held up voting.

After the bill failed Wednesday, Toi Hutchinson, Pritzker’s senior advisor on cannabis control, urged lawmakers “to take swift action on passing the cannabis legislation“ in its next session.

“Holding an additional lottery for conditional adult-use dispensary licenses will not only provide a path to participation in the industry for Illinoisans from all backgrounds, but also provide high-scoring applicants from the first round an opportunity to gain a license,” Hutchinson said in a statement.

The push to double the number of new recreational dispensary permits came after the state’s earlier process to issue 75 dispensary licenses was mired in controversy and delayed indefinitely.

When state officials announced in September that just 21 of the more than 900 applicant groups qualified for a lottery to determine who would get those pot shop licenses, the list was packed with people with deep pockets, political connections and ties to the industry. A series of lawsuits challenging the choices followed, prompting Gov. J.B. Pritzker to establish a supplementary grading period to give some of the jilted applicants a chance to revise their applications and challenge their scores.

The latest attempt to create a more diverse weed industry would have allowed losing applicants from that first round to reapply for the additional 75 licenses. Perhaps most notably, the legislation would have lowered the bar for qualifying for a second lottery for dispensary licenses.

All the firms tapped for the delayed lottery had received perfect application scores after winning extra points for having a military veteran involved in their proposed operations. That issue drew the ire of some losing social equity applicants who claimed that barrier undercut the goal of emboldening minority entrepreneurs.

However, applicants would have also faced new limitations under the bill that failed to pass Wednesday. The pot shop hopefuls would have been limited to submitting just two applications, and individuals seeking licenses would only be able to serve as a principal officer in a single applicant group.

Those changes drew criticism from two influential figures in the cannabis industry.

Pam Althoff, a former state senator who serves as the executive director of the Cannabis Business Association, insisted that the state “needs to engage in a transparent, inclusive and collaborative conversation with stakeholders, including other social equity organizations, to work toward an equitable solution.”

“Social equity applicants have invested their life savings, putting their lives on hold in the hopes of joining the cannabis industry as promised by the State of Illinois,” Althoff said in a statement. “This is the second time the State’s process for awarding cannabis licenses has failed these applicants, first last summer and here again six months later.”

Edie Moore, executive director of the Chicago chapter of the National Organization for the Reform of Marijuana Laws, penned a letter to Ford warning that the proposed changes “unfairly disadvantaged” hundreds of social equity applicants who submitted multiple applications during the previous round. Moore is also listed as a manager of two of the applicant groups that qualified for the initial lottery.

“In an effort to catch phantom ‘bad actors’ who ‘flooded the pool,’ the sponsors failed to consider those many, many groups of true [social equity applicants] who applied on multiple teams as [principal officers] or investors,” Moore wrote.

The bill’s sponsors didn’t immediately respond to requests for comment. 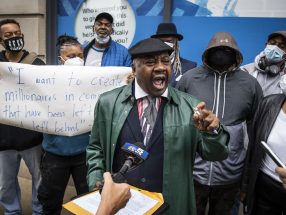