Politically wounded by the indictment of one of his close confidants and three others, Madigan was busy Friday calling legislators to assure them he’s planning to run for another term as speaker and gauging their support.

House Speaker Michael Madigan may be down, but he’s not out –— at least as far as he’s concerned.

Politically wounded by the indictment of one of his closest confidants and three others, Madigan was busy Friday working the phones, calling some fellow Democratic legislators to assure them he’s planning to run for another term as speaker and gauging their support.

“The decision on the next speaker of the Illinois House will be made at a caucus, after a full discussion of the issues facing our state and the qualifications of the candidates,” Madigan said in a statement. “I plan to be a candidate for speaker, and today I confirmed that I continue to have support from a significant number of House Democratic caucus members.”

Whether that support will be enough to carry Madigan over the threshold remains to be seen —as the number of Democrats breaking ranks grew on Friday.

Assistant Majority Leader Rep. William Davis said he had a “very short” conversation with Madigan Friday. The speaker asked for the Homewood Democrat’s vote, and Davis told him he’d have it come January, when House members will pick their leader.

“I have told speaker Madigan that I would support him, and I would not back away from that support,” Davis said, though he’s also made clear he has his eye on the speaker’s gavel — once Madigan is ready to relinquish it.

“What I have said is that I would like to be the next speaker of the House, but, prior to what’s happened, that’s always been a ‘when-Madigan-leaves’ conversation,” Davis said. “And, right now, that hasn’t changed. As this plays out a little bit more, and if he comes to the conclusion that he doesn’t have the votes, I hope there will be another conversation about making a smooth transition of leadership.”

Asked if Madigan backs him as a potential successor, Davis said he has asked for Madigan’s support should the time come, and the powerful Southwest Side Democrat, who’s held onto the gavel for nearly 40 years, said simply, “OK, I understand.”

Madigan has not been charged with any crime and denies wrongdoing, but confidant Michael McClain and three other members of the speaker’s inner circle were indicted Wednesday for an alleged bribery scheme designed to influence him,

Madigan’s grasp on the speaker’s gavel loosened further on Friday, with two more legislators vowing not to support him, bringing the total of Democratic representatives who’ve said they won’t vote to reelect the speaker to 18.

Even if the remaining 55 stick with Madigan, he’s still five votes short of the 60 he needs for another term as speaker.

State Rep. La Shawn Ford said Madigan isn’t the only one concerned with a lack of votes.

“We have no one right now who can tell you they have 60 votes to win, so not only do we have a problem getting someone 60 votes, Madigan still probably has a majority of the votes,” Ford said, adding that “competition” for the position is healthy for the party.

Madigan called the West Side Democrat Friday, asking if Ford still planned to support him in his bid for speaker.

Ford asked if there were any developments looming that may change his mind about supporting the reelection bid, and Madigan “assured” him there was “nothing I should be concerned about” and he will be running for speaker.

“As long as the terms are the same, and he’s not indicted, I will continue to support him,” Ford said.

To Ford, it does House Democrats “no good to play out our housekeeping publicly.”

“If we’re going to have a new speaker, it makes no sense for us to play it out in the public, … it puts blood in the water for Democrats, and the Republicans see it,” Ford said.

He also took aim at those who’ve called for Madigan to step down or who’ve said they’re not voting for him saying “it’s all political.

“If it was about morals or ethics they would’ve called for him to resign a long time ago,” the West Side Democrat said.

Rep. Stephanie Kifowit of Oswego has already announced her challenge to Madigan.

Along with Davis, the names of other Democratic state representatives who may run for the powerful position, or have some interest in it, have started to circulate.

Cassidy was the only one who responded to the Sun-Times’ requests for comment.

One of the 18 who have publicly vowed not to support Madigan, the North Side Democrat did not receive a call from the speaker.

Cassidy said going for the speakership is something “my family and my team and I are discussing.”

“I think that what I’m most looking forward to is actually starting to hear from other colleagues as well about what their vision for a new path forward is and what we can do, collectively, to restore confidence and to restore our focus on the policy issues that are core to our party,” Cassidy said.

But she said she already knows what the chief issue is: restoring trust in Springfield. 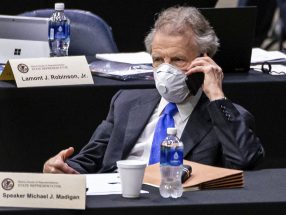