State Rep. Emanuel “Chris” Welch, 49, was first sworn in to the House in 2013 and will start his fifth term later Wednesday. He would be the 70th Speaker of the Illinois House and the first Black person to hold the position.

SPRINGFIELD — Signaling the end of one era and the beginning of another, state Rep. Emanuel “Chris” Welch was elected the new speaker of the Illinois House on Wednesday — succeeding Mike Madigan, the longest serving statehouse speaker in U.S. history.

Welch is the first African American to win the powerful leadership position.

The Hillside Democrat was elected, 70 to 44, over House Republican Leader Jim Durkin of Western Springs.

Madigan, 78, in a symbolic passing of the torch of leadership cast his vote for Welch.

That’s only four short of the entire 73-member Democratic Caucus.

The later vote of the entire House came just minutes after the swearing-in of newly elected members of the General Assembly.

State Rep. Maurice West nominated Welch and asked the body to give a standing ovation for the “legacy and the service of Speaker Michael J. Madigan.”

Democrats and most Republicans took to their feet, some GOP House members immediately, others more slowly.

In a statement shortly before the swearing in, Madigan said “it’s time for new leadership in the House.”

“I wish all the best for Speaker-elect Welch as he begins a historic speakership,” the statement continued. “It is my sincere hope today that the caucus I leave to him and to all who will serve alongside him is stronger than when I began. And as I look at the large and diverse Democratic majority we have built — full of young leaders ready to continue moving our state forward, strong women and people of color, and members representing all parts of our state — I am confident Illinois remains in good hands.”

Regarded as a Madigan loyalist, Welch, 49, was first sworn in to the House in 2013 and will start his fifth term later Wednesday. He would be the 70th Speaker of the Illinois House and the first Black person to hold the position.

Welch, the leading contender for the top House leadership spot, fell five votes short earlier Wednesday morning of the 60 needed from his Democratic colleagues to get the job, sources in the room told the Chicago Sun-Times.

Sixty votes are required to become speaker — a crucial threshold that decades-long incumbent Madigan could not meet earlier this week, a signal of the embattled Southwest Side Democrat’s waning power.

Welch entered the race on Monday, after Madigan’s stunning decision to suspend his own campaign kicked off a series of fast-moving developments.

Tuesday saw state Rep. Jay Hoffman of Swansea joining the fray, and the two remaining Democratic women in the race — Stephanie Kifowit of Oswego and Ann Williams of Chicago — drop out.

Welch has drawn criticism from Republicans for his role as chairman of the House Special Investigative Committee that was charged with investigating Madigan last year. The committee ended abruptly after meeting three times and calling only one witness.

The panel did not find that Madigan engaged in wrongdoing in his dealings with ComEd. Madigan was implicated in an alleged bribery scheme in which ComEd is accused of sending $1.3 million to Madigan’s associates for doing little or no work for the utility in order to curry favor with the powerful politician.

Welch’s bid drew concern from female legislators and others Tuesday after news reports of a 2002 police report detailing an alleged attack on an unidentified woman, with whom he was in a relationship.

In the police report, the woman said she was returning to Welch’s home to grab some of her belongings after their relationship ended. During that argument, she called Welch a “loser” and he became “enraged” and is alleged to have “grabbed her hair with both hands while in the kitchen and slammed her head backwards numerous times on the counter top,” according to the police report.

Welch denied grabbing the woman and he was never charged in the case.

In a statement addressing the police report, Welch blamed Republicans for bringing up what he called a “verbal argument” that occurred “nearly two decades ago.”

“I will be honest that I have reconciled with the individual since that night,” Welch’s statement continued. “In fact, after our dispute we sought out the authorities ourselves. Their family lives in my district and are proud supporters of my public service and work. However, I must convey my dismay over the lack of decency displayed by the GOP politicians and their urge to use this report against me. At no other occasion have these events been brought up and I firmly believe my Republican colleagues are threatened by the potential growth of my profile.”

Madigan, 78, who is also chair of the Illinois Democratic Party, has been battered by the ongoing federal investigation of the ComEd influence-buying scandal in Springfield. Madigan has been implicated but not charged in the investigation.

But the federal probe had increasingly complicated his path to another term as speaker, a position he’s held for all but two years since 1983 — longer than any other statehouse speaker in the nation. 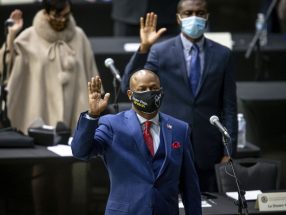