They both have known that special something that comes from controlling the fates of others and bending events to one’s will. And they aren’t ready to relinquish that.

They have known that special something that comes from controlling the fates of others and bending events to one’s will — and they aren’t ready to relinquish that.

When some readers raised this very comparison just days ago, I rejected it out of hand, so great are the personal differences between the two men.

But, upon reflection, there’s no denying the common denominator in their present circumstances: power and its allure.

His claims that the election was stolen from him are without merit, and his methods of pursuing those claims are dangerously reckless. His efforts to undermine the vote are without precedent in our modern history.

There were people who said all along that he would refuse to leave office, an argument that was used to justify impeachment, among other things, and my thinking then was that we’d have to cross that bridge when we came to it.

Now, the bridge is before us. It’s a precarious time when Trump has been voted out but remains in power. On the other side is the Biden presidency, not a safe haven by any means but terra firma compared to the past four years, only Trump and his saboteurs are trying to blow up the bridge.

We must trust in our legal systems and in the belief that other Republicans who still hold power will see the wisdom of getting everyone safely across.

In the meantime, I would respectfully ask my Democratic friends to think twice before participating in any street demonstrations the next few weeks.

The time might come for that, but please be clear that there are forces on both the right and the left that will use any opportunity right now to take us further into dangerous territory.

It took Trump just four years in the White House to develop a lust for the type of power not even money and celebrity can buy.

Imagine then what is happening with Madigan, who is clinging to the speakership of the Illinois House, a position he has held for going on four decades.

Unlike Trump, Madigan just won re-election to his Southwest Side seat and had asked his colleagues to give him another term as speaker, which they seemed prepared to do despite a corruption scandal nipping at his heels.

But a federal indictment Wednesday of a key Madigan ally in an alleged scheme implicating the speaker has turned the tide, causing enough defections that he now appears short of the 60 votes needed to keep control of the House.

Much as Trump says the election result was unfair, Madigan sees unfairness in a legal process that has placed him under suspicion without charging him. The result is the same: He needs to go.

Of the two, I would consider Madigan the more likely to go quietly — and honorably — in the end, but, if there’s a way to hold on longer, he will try.

More than any politician I’ve ever known, Madigan has held power for its own sake, his efforts focused on keeping his majority more than any particular set of policy considerations.

They say timing is everything in politics, and Madigan’s has been better than most. But he missed his cue to leave.

That would have come sometime after his role in defeating former Republican Gov. Bruce Rauner, when people like me were still glad to have him around as a bulwark against Rauner’s policies, but before federal agents had devoted so much time and energy investigating him.

Some Democrats worry everything will fall apart for them without Madigan to orchestrate their strategy.

Sorry, but if Democrats can’t govern without Madigan, they don’t deserve to do so. And I expect they’ll get along just fine.

Mike Madigan is no Donald Trump, and vice versa. But right now they share the same problem — not knowing when to leave. 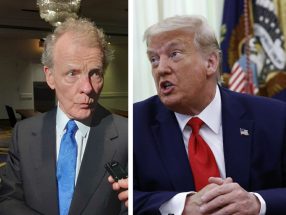