SPRINGFIELD, Ill. – Speaker Emanuel “Chris” Welch says he wasn’t even born when Mike Madigan was first sworn into the House in 1971. Now, 50 years later, Welch is taking over the chamber.

January 13, 2021 will appear in many history books as the day Madigan stepped aside and Welch became the state’s first Black Speaker. The Hillside Democrat said he never expected he would be the next in line for the Speaker’s gavel, especially during a busy lame-duck session.

“I’m gonna take it all in at some point,” Welch said Wednesday. “It’s gonna hit me and I’m gonna really try to soak it all in and enjoy it with my family at some point. This really is an awesome position and responsibility that we’re receiving.”

Welch already led the powerful Executive Committee and had a thunderous voice during debates on the House floor. He also chaired the special legislative investigation into the former Speaker last year. Welch eventually blocked Republican efforts to issue subpoenas for Madigan and close allies to testify about the Commonwealth Edison bribery scheme.

This week, Welch became the lead candidate for Speaker the same day Madigan announced he would suspend his own campaign for a 19th term. The new Speaker says he wants to work with all lawmakers, a stark contrast from Madigan who rarely allowed Republican bills up for a vote.

“I want to be open and accesssible and work together to solve the very serious issues in this state,” Welch explained.

House Minority Leader Jim Durkin still believes Welch acted as a shield for Madigan during the legislative investigation. Durkin previously said he doesn’t work well with Welch, calling him “an extension of Madigan.”

But, Durkin appreciated that Welch is willing to engage with Republicans moving forward.

“We both are very passionate about our positions, and that will continue,” Durkin said. “But, I’m extending the olive branch of cooperation starting today.”

The Capitol Bureau asked Welch if he can separate himself from Madigan’s influence to have his own voice and vision. He noted the former Speaker should be applauded for everything he was able to accomplish for the state and Democrats. Welch also stressed he has learned a lot from Madigan’s leadership.

Meanwhile, Welch already said he intends to pass a law creating a 10-year term limit for Speaker. Madigan led the chamber 36 of the last 38 years.

The former Speaker will now be known as Rep. Madigan, joining his colleagues on the House floor. However, Madigan will continue to serve as Chairman of the Illinois Democratic Party. He released a statement endorsing Welch shortly before the inauguration ceremony.

“It is my sincere hope today that the caucus I leave to him and to all who will serve alongside him is stronger than when I began,” Madigan stated. “And as I look at the large and diverse Democratic majority we have built—full of young leaders ready to continue moving our state forward, strong women and people of color, and members representing all parts of our state—I am confident Illinois remains in good hands.”

Gov. JB Pritzker congratulated Welch on the historic moment and change for the future.

“Speaker Welch has a record of championing legislation that has improved the lives of hard-working Illinoisans, and I have enjoyed working with him to move our state forward,” Pritzker stated. “As Governor, I believe strongly that it is incumbent upon me to work with the General Assembly’s leaders who are chosen by their caucuses, and I look forward to continuing to work with Speaker Welch on our shared agenda.”

“I know firsthand the commitment he has to the people he represents,” Harmon stated. “We have monumental challenges ahead of us this legislative session. I look forward to working with Speaker Welch to meet them.” 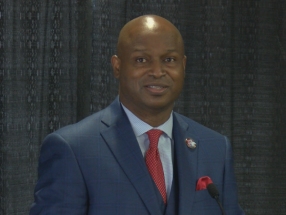