Moments after state Rep. Emanuel “Chris” Welch (7th) was sworn-in on Wednesday as the first African American speaker of the Illinois House, praise and congratulations poured in from many other Black political pioneers in Proviso Township. Welch spent his formative years in Maywood and Bellwood, and graduated from Proviso West High School in Hillside, where he currently resides.

Sen. Kimberly Lightford (4th), a longtime Maywood resident who made history of her own in 2019, when she became the state’s first African American female Senate Majority Leader, said Welch’s election to the speaker’s seat “marks another important step forward for Black Illinoisans in our long march toward equality. Coupled with the passage of much of our agenda to rid the state of systemic racism, this has been an incredible week for African Americans in Illinois.

“On a more personal note, I want to congratulate Speaker Welch as my state representative, my constituent and my friend,” Lightford added,  before addressing Welch directly. “I look forward to continuing to work closely with you to advance the progress of our state, the Black community and the residents of our shared district.”

Cook County Clerk Karen Yarbrough, who also lives in Maywood and is the first woman and the first African American elected her position as clerk, said Welch’s becoming speaker “is a fitting and just tribute to his leadership, and I have great confidence that he will serve with distinction in working to move our state forward.”

Yarbrough, who is Welch’s immediate predecessor as state representative for the 7th District and once served as Assistant Majority Leader in the House, said she’s looking “forward to working with him on legislation concerning the operations and efficiencies of the Cook County Clerk’s Office, particularly with respect to our continued efforts to safeguard and protect the integrity of our electoral process as well as expanding access to the ballot as broadly as possible.

House Speaker Emanuel “Chris” Welch, D-Hillside, holds his first news conference after taking the Oath of Office to become speaker of the Illinois House of Representatives in the 102nd General Assembly on Wednesday at the Bank of Springfield Center. | Justin L. Fowler of The State Journal-Register

“This is absolutely fantastic,” said Maywood Mayor Edwenna Perkins, the village’s first African American female mayor. “This just proves what good comes out of Maywood. I wasn’t even aware that he was looking for the position, so all I can say is it’s fantastic and awesome. He’s always been fair to us in Maywood and we’re not looking for him to do anything beyond just treat us as he’s always treated us and that’s more than fair.”

Bellwood Mayor Andre Harvey, himself that village’s first African American mayor, said Welch’s election as House speaker “couldn’t happen to a better guy. He’s a hard-working guy who has always cared about the community. He’s always tried to look out for his district. He’s a Bellwood guy, a Proviso West grad, so he’s our guy. And it couldn’t have happened to a better person, not just because he’s the first African American to hold the seat, but he’s perfect for the job. He’s even-keeled, truly cares about the community and truly wants to do the right thing.”

“I know he will take the charge and be diligent and fair with the decisions being made, particularly those being made in Black and Brown communities,” Thompson said. “So, it’s very huge for the communities. Chris has always been on the front lines advocating for fairness — for women and people of color — and making sure we have equity in our communities. I wish him all the best and support him 1000 percent. It’s a good day for us in Illinois.” 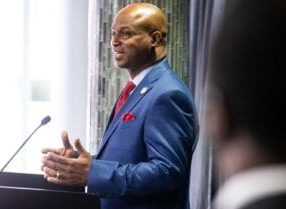