The following are direct links to some of the major sites dealing with state and local government in Illinois. Links will open in a new window. 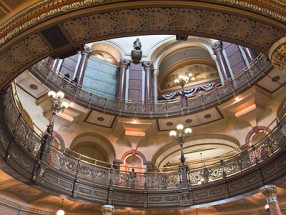 Under its constitution, Illinois has three branches of government: executive, legislative and judicial. Legislative powers are granted to the Illinois General Assembly, composed of the 118-member Illinois House of Representatives and the 59-member Illinois Senate. The executive branch is led by the Governor of Illinois, with four other constitutional officers being separately elected. The judicial branch in Illinois is led by the Illinois Supreme Court, a body comprised of seven elected justices.